meanwhile, back in the zendo …

Completely unmentioned but silently at operation beneath the surface of these pages, the past couple of months have been characterized by huge dramas, my heart and energies wrapped up in traumatic changes not at Zen Center, but in the organization that houses my day job.  My duties almost completely changed when I got back from China and I have spent the past three weeks trying to un-bury myself from all the new and old deliverables that were awaiting my return.  During those three weeks it seems like I have started most sentences to colleagues with “I’m sorry I haven’t gotten you X….”

The zendo during this time has been missing me, and I it, on more than a few mornings as I either went to work early or returned so late as to make a 5am wakeup potentially disastrous.  But we had our monthly one-day sitting yesterday and I was able to carve out the whole day for a much-needed date with emptiness.

For the first time in awhile I was back on soku duty for breakfast.  (As a reminder, the soku is the person who directs the action inside the zendo while an oryoki meal is served.)  I didn’t have any particular concerns about being soku as I’ve done it many times, and I was grateful for the breakfast shift as it leaves the rest of the day for relaxed spaciousness, free from the temptations of anticipating tweaks in the schedule later in the day.

Things started to go wrong early on with the oryoki, but I failed to notice the pattern. I asked the head server to come up to help prepare right after the morning’s jundo, not thinking that there were two periods of zazen before breakfast and we only needed one for prep. She was kind enough not to question it.  The extra time turned out to be a blessing when the fukaten informed me twenty minutes before service that we had two condiments, which I should have asked about to begin with.  The head server and I had to scramble to bring up all the gomasio trays, put ketchup into 32 little bowls, rearrange all the trays and bring them back downstairs again before the servers showed up for orientation.

Once we were serving in the zendo there were some other little things that didn’t go quite well either.  The servers weren’t sure whether everyone got condiments and neither was I, so I breached protocol to ask if anyone was missing them.  And then when I went to make the food offering, somehow the chopsticks and spoon on Manjushri’s Buddha tray weren’t cooperating and it took so long to place them properly on the first and second bowls that I ended up rushing back to the back of the mat in order to synchronize my bow with the assembly’s chanting.

But the real disaster was in serving the first pots of food to the assembly.  The servers all went out to their positions, but they were running out of the food in the pots and for some reason I just wasn’t able to track where they’d been and where they hadn’t been – perhaps a bit of decision fatigue from the past few weeks at work.  The servers were doing exactly as I’d asked them and telling me where they had left off as they came back to the entrance, but none of it was sticking in my brain and I eventually had to wander out into the zendo to see where everything stood and who still needed rice cereal and who needed juice.  Getting food into everyone’s bowls took an enormous amount of time, time that encroached into the break everyone was supposed to have between breakfast and the next period of zazen. Ooph.

This sitting was about 60 people, which is only moderately large.  I’ve been soku for meals of 90-person sittings, half again as many as this weekend, that didn’t entail this sort of breakdown in efficiency.  This one was not my best delivery, and the Ino was cranky about how long it took.  I hate making the Ino cranky.

Here is the advice I gave to the servers before the meal:  to remember that oryoki is not so much about getting it right, but about being present with what’s happening and engaging in discovery about your relationship to the forms.  That the ceremony is about generosity, not only with the people you are serving, but also with yourself.  I wonder now whether I had been working with these ideas myself during the meal.  The gift of oryoki keeps on giving as I sift through possible lessons now.

Just before lunch I mistakenly wandered through the student lounge just as the lunch crew was about to start their orientation. The soku for that meal asked me, “How did it go?” and I said “Breakfast? [pause] I don’t recommend following my example.” That got a few laughs … and then the lunch crew actualized a beautiful example of how fluid and efficient oryoki can really be.  I wasn’t jealous.  Really.

Today was another rainy day in the San Francisco Bay Area, and I got to spend part of it wandering around a park getting soaked.  I was in the company of some beautiful spirits in the form of two lovely women and three rambunctious huskies.  Dogs really are healers, I think.  (Once I remarked to one of our priests that I loved “being around dog-consciousness,” and the way she laughed at the phrase let me know that she was not the serious, straight-laced person I had thought she was until then.)  Dog-consciousness is so straightforward and exuberant that it makes me feel silly about all my usual self-involved concerns.  To wit, regarding yesterday’s oryoki:  everyone got fed, and no one got hurt. Nothing seriously wrong, just a few things to think about. 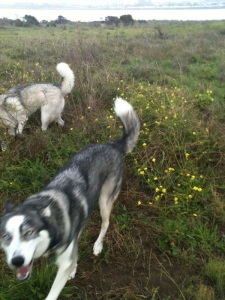 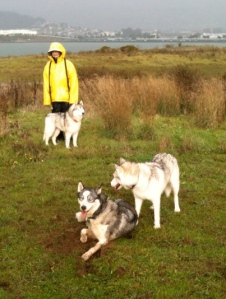 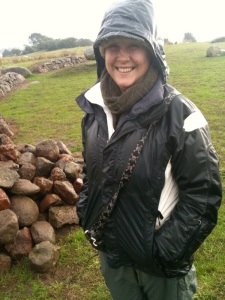 Gretchen lives in San Francisco. She writes about Zen practice and mundane moments on a planet that is increasingly ... hot.
View all posts by gretchen →
This entry was posted in Daily Life. Bookmark the permalink.

1 Response to meanwhile, back in the zendo …