the episode in which I monkey around with clinging and aversion

One more in a series of random snapshots from my October 2011 trip to China and Thailand. 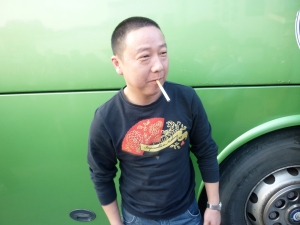 Following adventures at the Fourth and Fifth Ancestors’ temples and the Luhua Nunnery in Hubei Province, my tour group took off for Anhui Province and Jiuhua Mountain, one of Chinese Buddhism’s four sacred mountains.  Our bus driver is shown here in one of my favorite photos of the tour, wearing a t-shirt that says “Impossible is Nothing.” He claimed his name was “Beautiful.”  I think it fits.

Jiuhua Mountain has a very nice new hotel with the first coffee (mm, can you call it that if it’s Nescafe?) I’d had in several days.  We spent the night there and in the morning headed up in a cable car to Tiantai temple, at 1342 meters the highest temple on Jiuhua Mountain.

The cable car was an older system with not enough capacity for the number of tourists trying to get up the mountain.  We snaked along in long lines as if we were at Disneyland waiting for  Space Mountain.  Eventually we made it into the cars and had a pleasant ride up the side of the mountain in some pretty nice country.  After exiting the cable car, we were dumped out onto a set of walkways and stairs that would take us to the first level of the temple.

That’s when I saw the monkeys.

It’s possible that someone had said something about the monkeys. But there were a lot of us and we weren’t all together all the time, so I didn’t get the memo.  All I knew was there they were on the path, looking adorable and acting as though it was completely natural for them to be just hanging out watching the tourists trudging by.

That monkey over there on the left, up the path a ways?  I was thinking to myself it would make SUCH a good photo if only I could get down and shoot him from eye level.  So I walked up a little closer and crouched down below the chain fence to get a better shot.

And the next thing I saw was this:

The next thing I heard, probably before I saw the blurry blob of fur coming at me, was an enormous growl, or perhaps it was more of a scream, issuing forth from the beast.

And then I had this warm, muscled, hairy thing clinging to my right calf trying to sink his teeth into my shin.  I felt his (her?) weight pulling down on my leg, his hot breath, sensed the shape of his open jaws through my pant leg as he clamped down. And then from out of nothingness a second monkey, one of his buddies, was suddenly clinging to my other leg.

Nowhere in my plans for the day had there been the possibility that at some point I’d have two monkeys wrapped around my lower legs.  My overall response was pretty much “how astounding, look at this, I have monkeys on my legs!!”  and a huge sense of marvel.  I wasn’t afraid. I was flabbergasted.

My brain didn’t have a chance to kick into the next stage of figuring out what kind of action I might want to take that would prevent me from being devoured by monkeys or carried off by them or whatever their plan for me might be, because in the meantime my friend Sandy just ahead of me had seen what was going on and unlike me he was not distracted by the marvel of it all and so he made himself appear nine feet tall and yelled out at the monkeys “Haw! Haw!” Or perhaps the utterances were in Chinese which he knew a bit of, these were Chinese monkeys after all.  They sounded like just the right words from where I stood, whatever language they were in.

Too bad for Sandy, the net effect of his lightning-quick reflexes on my behalf was that the monkeys jumped off of my legs and straight onto his.  And then like in a dream, the air was filled with a barking sound and a big shaggy dog appeared from on high, bounding down the stairs toward the monkeys, and the monkeys jumped off of Sandy’s legs and chased after the dog, who did a quick U-turn, and the whole riled up animal entourage disappeared into the forest.  They left a few of their calmer monkey friends sitting in the trees or along the path, looking nonchalant as if nothing had happened.

It occurs to me that I’ve had moments like this before, and right now I’m thinking about the time I drove up from Los Angeles to Santa Cruz and took a shortcut along the back roads of San Juan Bautista. I knew this shortcut from years before when I had projects in the area working as a geotechnical engineer in San Benito county.  I was cruising along at a pretty fast clip down a farm road in my Acura Integra with the cassette deck at full volume, singing along, and it was 9 or 10 at night, and suddenly I remembered that the road I was on came to a “T” in just a few hundred yards, and in front of me was the line of trees marking the place where I was going to need to do a 90-degree turn, and I didn’t have enough room to slow down.  And in that long pause inside my head I heard “well, that was stupid – Mom and everybody else are going to be baffled as to how this even happened” as I prepared to crash into the trees and meet my demise.  Only I didn’t – I actually fishtailed a bit but made the turn, and suddenly I was on the next road heading in a new direction and my heart was beating about twice as fast as it should, but other than that there was nothing at all unusual about the road, my car, the speed, the farmhouses, the trees … and it was kind of weird, because I had almost died but absolutely nothing had changed as a result of it.

Similarly, once the monkeys and the spirit dog (or whatever it was) were gone, we all just continued walking, passing by the calm monkeys in the trees, appreciating the view.

Olga caught up to me a few minutes later and asked if I was doing okay, so at least I knew there was one other person who realized something had just happened.  We checked my leg to make sure the monkey bites hadn’t done any damage. There was monkey spittle on my pants leg, but no monkey teeth had penetrated cloth or flesh.

So that‘s the story of the monkeys.

The next day I caught up with Sandy and thanked him for his valor, and we rehashed the event a bit.  Embedded in Sandy’s version of the story was an implication that the monkeys had acted out of something like malice, and Sandy noticed this and apologized for it (good Buddhist!). I said oh yeah, really it was more like a big hug they were giving us, and we both laughed.

So now here are some photos from the mountain – 800 steps from the cable car up to the temple at the very top.  Like many of the temples on Jiuhua Mountain, this one is  dedicated to a Bodhisattva named Ksitigarbha, more commonly known in the US by his Japanese name Jizo.  Ksitigarbha is the guardian of beings in the hell realms and also of children. There was a Korean prince who lived at Jiuhua Mountain who the monks thought was a reincarnation of Ksitigarbha, and that prince encountered nirvana at this top temple; we visited another temple built for him further down in the valley that housed his body after his death.

Pilgrim doing prostrations up the stairs to the upper temple 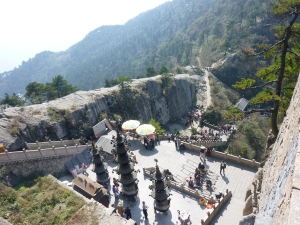 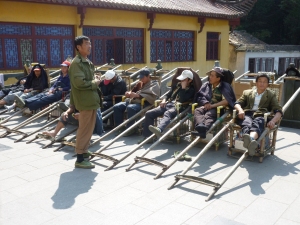 theoretically possible to be carried up ... ethically impossible for many of us 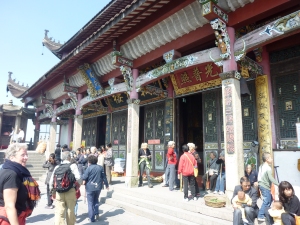 eventually you reach the highest temple 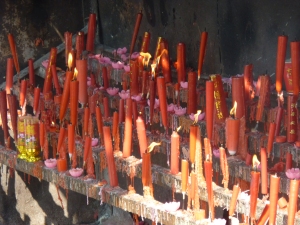 lovers and pilgrims shackle their vows to the fences 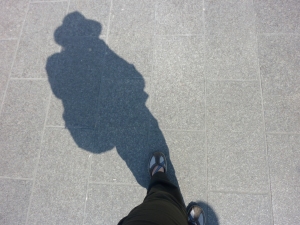 gateway to the next episode

Gretchen lives in San Francisco. She writes about Zen practice and mundane moments on a planet that is increasingly ... hot.
View all posts by gretchen →
This entry was posted in Travel. Bookmark the permalink.